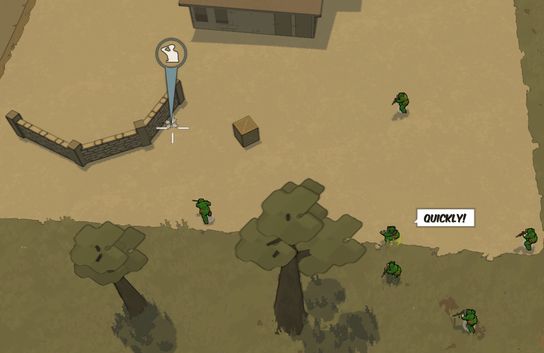 When your character is of sufficient rank, squadmates will begin to follow you around. Soldiers of lower rank will automatically join your squad.

Members of your squad will have small grey indicators under their feet and will stay within a certain distance of you. By default they will follow you, but clicking the right mouse button (RMB) will order them to specific places. By double clicking RMB you can order squadmates to charge a position without taking cover.

A higher ranked officer nearby may "steal" soldiers from your squad to fill out his own squad. The size of your squad is determined by your XP: you can have one squadmate for every thousand XP, up to ten. Squad size does not correlate with rank.

Squad members will attempt to enter any vehicle that you enter and will fill as many seats as possible. If, however, you are in the passenger seat of a vehicle and your squadmate is in the driver's seat, you can click RMB to command the driver to drive around the screen.

You can also open up the Map and click RMB on the Map to set waypoints further away. The driver AI will drive there, terribly, often running over other friendly troops.

Pressing PageDown will decrease your squad size. This can be useful when you want to sneak into an enemy base without being spotted, or if you just want to be a lone wolf. Pressing the PageUp key will increase the squad size to the max size a soldier of your rank can support.

Being the squad leader you can also split the squad into a vehicle sub-squad (which handles the vehicle and the mounted weapons) and a foot squad which will provide infantry support.

You need a modification key (MOD) bound to use these commands. The default is Windows key. 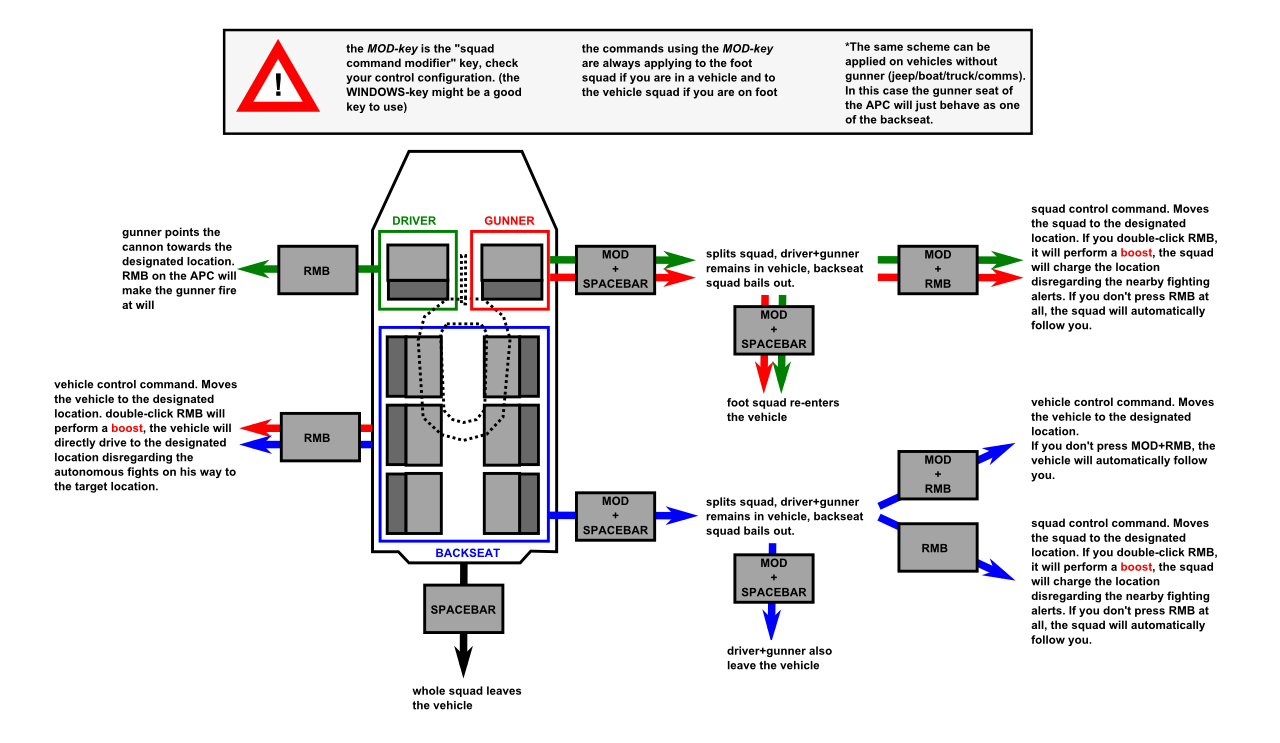 The squad layout represents the kind of soldiers you want in your squad. For example, the "Default Squad" layout will try to pick up first a soldier with a medikit on him and the other squad members are chosen randomly.

Squad files are anything of extension .squad_config in \media\packages\vanilla\factions. They are in an XML format, which is beyond the scope of this document; for basics, try this tutorial. Skip down to "structural elements" if you don't want to read the history of XML and HTML.

This XML header should be the first thing in the file. We can probably put multiple squad definitions in a file.

Squad config: Replace NAME with the in-game name you want to see. It should probably not have any spaces or be very long.

Soldier tags indicate preferences (or possibly requirements?). This tag will accept any soldier.

This tag dictates that the soldier should have a machine gun and a bazooka. It is unknown if the order of tags matters, or if a soldier cannot be found, the rest of the squad will not fill out.

Valid values for weapon1_tag are

Valid values for weapon2_tag are

Each weapon is tagged in its .weapon file in \media\packages\vanilla\weapons.

is a valid tag for both fields, it's useless because AI will not use silent weapons!

After 3 hours of testing, it is possible that by using another string

you may be able to add soldiers wearing vests or carrying valuables into your squad while excluding normal soldiers. This may allow the formation of an all-elite squad or a suicidal farming squad. More testing is needed but such a development may provide users with the ability to form more powerful squad layouts.

Alternatively from the format above, you can also use

to specify a specific weapon for the selected soldier's loadout. It is also important to keep in mind that while doing so allows you to more fimly control your squad layout, it also becomes harder for you to locate soldiers with the exact weapon set depicted. It may also be possible to add elite soldiers to your squad by use of