How to obtain a mod from Workshop?[edit | edit source]

How to upload a mod to Workshop?[edit | edit source]

1. Download the steamcmd application for your operating system;
2. Somewhere outside of your RWR install folder make a folder where you will be storing the workshop item. I called mine rwr_mods; 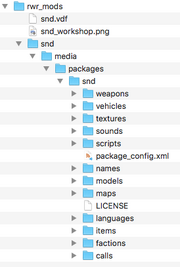 3. In that folder place the image that will appear for the workshop item (mine is 512x512px and < 1MB in size);
4. Create a <your_mod_name>.vdf file, which stores all the information about the mod. The following block gives an example:

appid is the app id for RWR. It is always 270150
publishedfileid will be returned after you first publish the mod on the workshop. You should populate this field in <your_mod_name.vdf> with that ID immediately, to allow you to add to your mod in subsequent runs of steamcmd

5. inside the folder created in step 1, create a folder that matches the name of your mod's folder name in rwr. For me, it's snd;
6. Inside that folder, create the folder structure media/packages/<your_mod_name>;
7. Copy your mod content into this folder. Your folder structure should now look something like the example image below this list;
8. Run the steamcmd utility, as follows:

How to create a mod?[edit | edit source]

Just want to make a simple mod for testing weapons, models, sounds etc. without dealing with all that other stuff? Here's a quick guide:

This section deals specifically with adding script support to quick match mods. If you simply want your mod to work in quick match mode, see the information surrounding the simple template files, above.

Enabling script support in Quick Match is possible, but requires some thought if your goal is to use the same scripts that work in campaign mode in a quick match. The reasoning behind this statement is that campaign mode extends the invasion game mode, and invasion mode expects the player will be taking part in a multi-level/map adventure. This is entirely different in Quick Match, where only a single map is concerned. There is no game state passed between start and end of each mission in quick match, so including script classes that make campaign mode work is not only pointless, but also adds overhead to your load times and is likely to create unexpected issues.

The following example describes one way to enable script support in Quick Match mode. You may find another or a better way to do this. If and when you do, please update this wiki page to share your knowledge with the modding community.

You must replace all occurrences of <my_mod> with the relevant text e.g. your mod's folder name in the below files...

hint: if you're using custom maps, include the quick_match_entry_script="start_quickie.as" statement inside the map_config tag block in the map's map_config.xml file as well!

Finally, the file specifies a number of campaign options as boolean settings, which dictate whether the player may customise the mod's default settings at launch.

Radio calls *.call and the all_calls.xml are found here. The invasion_all_calls.xml file is also present, but simply includes the all_calls file. All calls lists the file names of the call files that are included in the game. These files contain the actual call key value, which is referenced in /factions/common.resources to make the call available to use. To make a call faction-specific, include it in /factions/<faction>_default.resources, not the common resources file.

Items (excluding weapons) that can be worn such as vests and items that can be dropped from and picked up into a character's inventory. all_carry_items.xml and all_visual_items.xml are found in here and reference the physical file names for these items. Each of these files then notes the key value for these items. Finally, /factions/common.resources is used to include the carry items (by key reference) in the game. See the note above in factions regarding listing — but disabling — all faction-specific carry items in this file.

The contents of the package_ui.xml file in each sub-folder (by language code) is referenced by the /package_config.xml file. Primarily used to store key/value pairs for campaign descriptions, setup/config options, and to call the script /scripts/start_campaign.as that forms the entry point of the mod. Also see intro.xml for text info that displays on the loading screen.

Add your custom maps in here. Each map maps/<map_name> should have its own map_config.xml and scene.xml file here to fully customise the look and feel of the map.
- Important note: A scene.xml file anywhere else in your mod will override the settings you place in the file belonging to each map.
Change the default sounds and music for each map by adding .wav files directly into the relevant map's folder. For example, to override the standard daytime ambience with a custom, looping audio file you have created, add the file as <mod_name>/maps/<map_name>/ambient_daytime.wav

All 3D models are found here either in .xml (voxel) or .mesh (OGRE 3D) format. Note that while most vehicles are ogre meshes, the general consensus is that only voxel models can be animated via a skeleton (e.g. the soldier models). See soldier_animations.xml to understand how the animations are managed.

first and last name files, per faction. Referenced by <faction>.xml.

Angel Script files that allow you to modify and extend the game's behaviour. Do note scripts/internal/log.as allows you to control logging level to the rwr_game.log file. Handy for testing and debugging while building the mod.

all_vehicles.xml contains a list of the file names for vehicles in the game. As with other resources, these resources' keys need to be included by the common or faction-specific .resources files.

This folder contains the usual all_weapons.xml file along with all_throwables.xml. These two files list the file names of every *.weapon available in the game. Depending on each weapon's class, it will fire a *.projectile or apply an effect directly (melee/medikit/bandage). Weapon models are usually voxel-based if held by soldiers. To save doubling up on code — and unless you specifically want different weapons to be available in different game modes — you can reference the all_weapons.xml file from invasion_all_weapons.xml as follows:

How to run a mod on a dedicated server?[edit | edit source]

What to do with scripts?[edit | edit source]

Always 'tail' the rwr_game.log file in a terminal/powershell window when launching and playing your mod and have verbose debug log output enabled. The log provides invaluable insights to your mod's behaviour and performance.

This error indicates you have made reference to a non-existent character file in factions/<faction>.xml.
Ensure the file exists in the factions folder, is spelled correctly, matches the case and launch the game again.

Similar to the error above, this error indicates you have made reference to a non-existent call file in calls/all_calls.xml. Calls are generally processed in the order they are listed in all_calls.xml, so check which call was the last to load before the error occurred and the error will most likely be to do with the next referenced file. Also, make sure that the call in question is not currently opened by a text editing program (Notepad, Notepad++, WordPad, etc). It is generally good advice to close ALL files and text editors before loading up a game.

Validate your XML file. There is likely a syntax issue or a duplicate declaration inside a tag.

Something related to the weapon declared in the first <turret ... /> block in the vehicles/<a_vehicle>.vehicle file is erroneous. Either the weapon file has not been loaded, the key is a duplicate, or the .weapon file is otherwise misconstructed. Similarly, slot '1' refers to the second turret block, slot '2', the third, etc.

Attempting to use custom projectile trails in mod (as .trail files). Issue is caused by the mod being loaded twice via scripts/start_campaign.as.
Comment out the following block to resolve:

Ensure the vehicle you are trying to spawn is listed in vehicles/all_vehicles.xml

Ensure the projectile you are trying to fire is listed in weapons/all_projectiles.xml

Appears to have occurred as a result of attempting to use an XML model on a vehicle instead of an OGRE mesh.

Issues that don't show up in rwr_game.log[edit | edit source]

- This generally indicates you have made a syntax error early on in /languages/en/default_shared.character, such as a missing forward slash '/' at the end of a <comment key="blah" text="blah blah" /> tag. Every line after the one(s) with a syntax issue will fail to be read at start time, resulting in the comment keys used in the commander briefing failing to appear.
- You may also notice unprivileged calls (xp < 1000) don't result in a text bubble advising "I don't have a radio yet" or other text string appropriate to the <comment key="no radio equipment"... />. These comment tags start from line 110, so your syntax error is going to be before this line.

- Ensure no filters are applied on the object (rectangle). Bottom status bar will show Rectangle (filtered) in layer... when the item is selected. Use Filters --> Remove Filters to fix then save objects.svg and reload game.
- Ensure the item/object has been placed in the appropriate layer.