The Greenbelts are one of the three main factions in Running with Rifles. Their primary design reflects the United States Military. Their primary color is green, with brown, black and tan additions.

TEMP NOTE: This page is being used to prototype updates to other faction pages. So for a while it might be a bit chaotic. 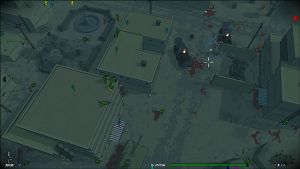 The Greenbelts are the "poster boys" of Running with Rifles, being featured in most promotional material and very prominent in the game as a whole. They are the most well-rounded of all factions, coming somewhere in between the precision and speed of the Greycollars and the power of the Brownpants. Although there is no objectively "best" faction in Running with Rifles, the Greenbelts are often the first factions players will play and be drawn to, and as such they are they definitive "RWR faction."

Fitting with their theme, the weapons of the Greenbelts generally follow a NATO-related pattern. The Greenbelts use very few, if any Eastern European or Asian weapons. The vast majority of Greenbelts weapons will be based around or off of weapons produced by the United States, such as the RWR1A1, the name and design a reference to the M1A1 "Abrams," the main battle tank of the United States Military.

The Greenbelts' weapons are the jacks of all trades in RWR, being powerful and precise enough for light and heavy operations, yet generally excelling at neither such as the Brownpants' power or Greycollars' precision let them do.

The soldier designs of the Greenbelts are based off the American military, with various other new and adapted elements mixed in. All of the Greenbelts soldiers feature either primarily a green or tan color scheme.

Examples of the various designs of the Greenbelts soldiers can be found below.